Travel to Arjana Peak in Cerna Mountains – May 2015

This trip was initially planned for May 9, 2015 but because of the bad weather we have to postpone it for a week. We traveled to Herculane having in mind two routes:

After we crossed Cerna River and followed the path to the right, we saw the little house of a water mill with two tourism signs: yellow point – the sign that we have to follow up to the ridge and red point – the sign for Cerna’s Marathon route. 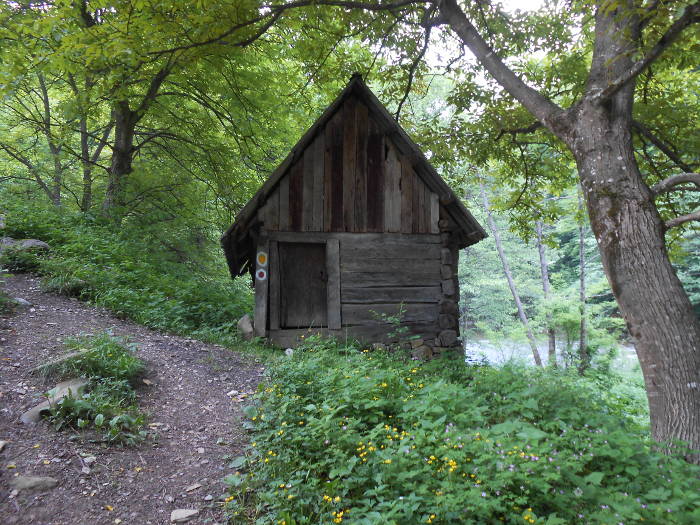 Going to the right, we crossed an old wooden bridge over Bedina, a Cerna branch, and we continuously go up through the forest, up to a meadow with a nice view to Mehedinţi Mountains and to the peaks of secondary branches of Cerna Mountains.

We admired the wonderful landscape, and then continued our trip on a picturesque path through the forest. For the next 90 minutes our way goes hardly uphill. The effort was very high but the view to Zăscolul Arjanei and blooming clearings was spectacular.

The way goes through orchards and on the margins of few lone farms situated at this altitude. Surprisingly, but we found here small areas planted with corn, potatoes and beans.

Due to the haystacks and to the multitude of blooming flowers and trees (May bush and elder), the smell was stunning. 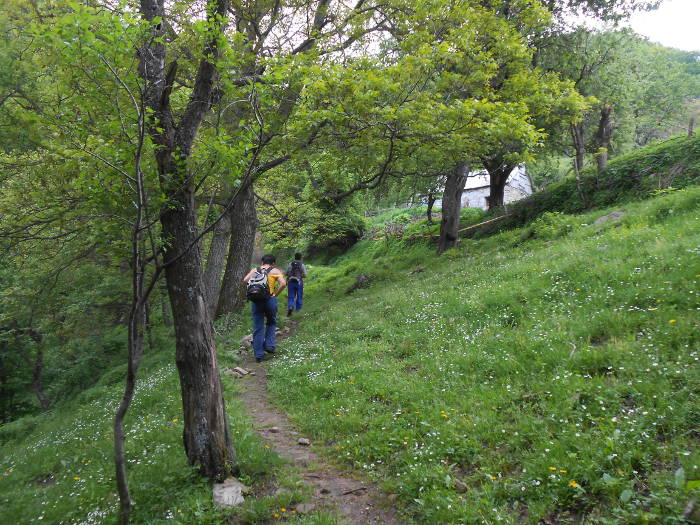 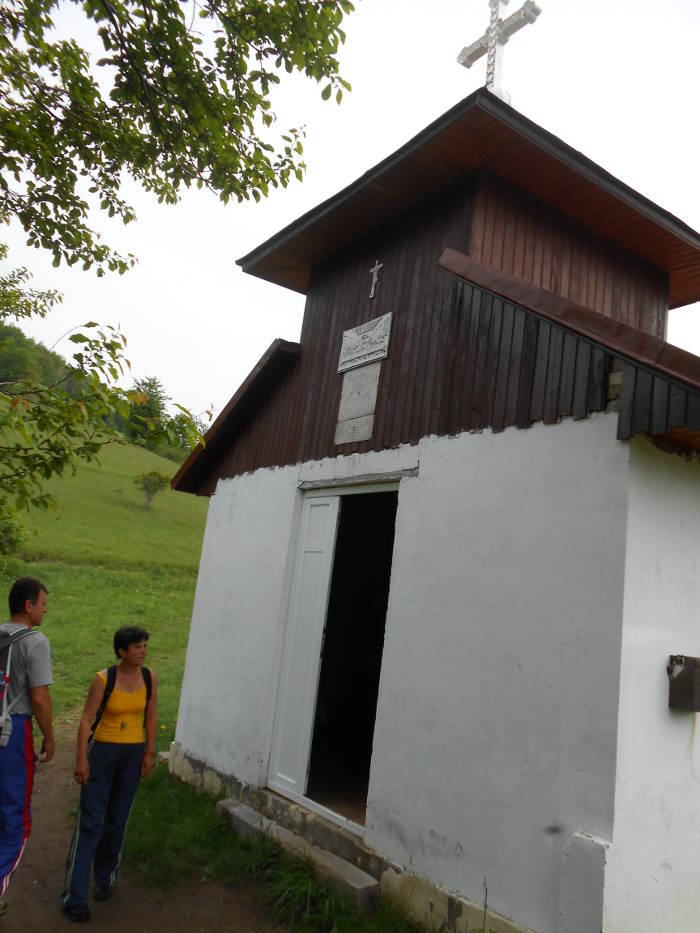 The charm of the moment was increased by the birds’ songs that in this moment of the year lay their eggs. The main performer was a cuckoo whose song we heard all the day long, no matter where we were.

Even if the weather forecast was not very optimistic, we were lucky.

We came to a spring within one hour and a half from the starting moment. We completed our water reserves for the next 6 hours . We knew that there are not water sources on our route. Within another 15 minutes we arrived to the little church of Dobraia, the core of a community formed by scattered households.

From this point we have two choices to continue our trip. We decided to follow the way to the right and in short time we have got to the primary school of Dobraia. 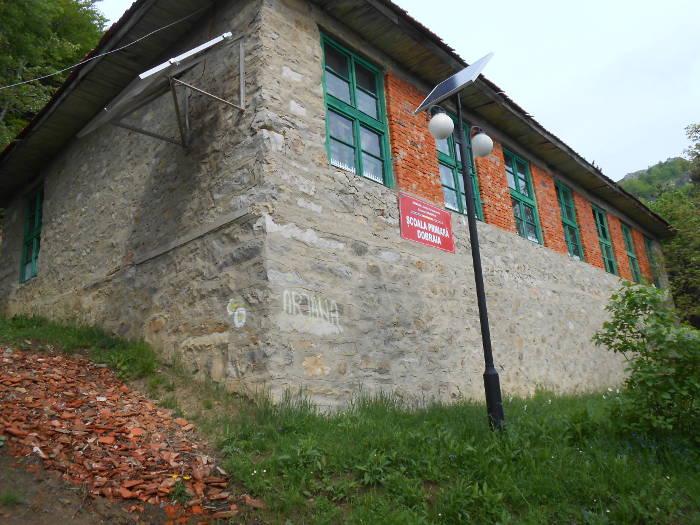 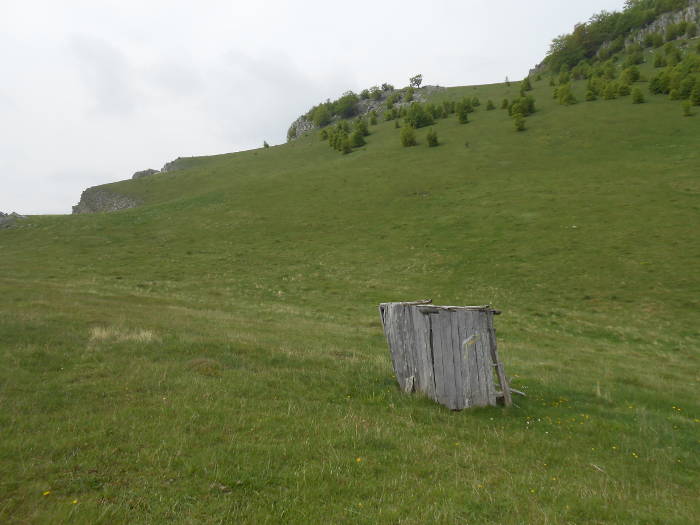 We rounded the school following the yellow point and continued to go up through the wood for 35 minutes, when we arrived in a large clearing having in the middle the remains of a wooden shelter. From its margins we had a look to the places that we already left back.
In this area the marking signs are missing, but we found the way straight ahead from the point where we got out from the wood. On the opposite side of the valley on the level curve we saw a path that we followed it from here.

In short time we faced again the problem of marking and we got on a grassy edge that goes slightly to the right. In front we could see the steep slope of the ridge between Zăscolul Arjanei and Biliana and all around the view was wonderful.

After another short passage through the forest we arrived in Șaua Prislop (Prislop Saddle) and to the left, into the wood, we found the ridge marking of Cerna Mountains – red strip.

Going hard upper and upper and we met the first blueberry bushes having newly pink fruits.
The red strip drove us in the saddle that precedes Zăscolul Arjanei Peak.

From here our way was to the left to Zăscolul Arjanei and further to Biliana Peak. Looking to the right we saw Arjana Peak not included in out route.

Our paths went further along a lacy crest both side bordered by steepness. 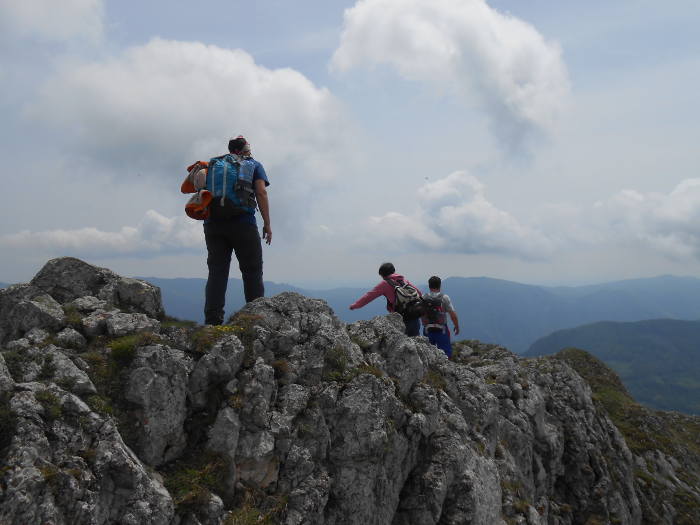 On the ridge between Arjana & Biliana

Crossing of this area requires attention and a few relaxation moments before. In the distance the sinuous line of Cerna Mountains met Godeanu and Retezat Mountains. At our feet lie down endless forests, velvety clearings and on the Cerna Valey we could identify Cheile Ţăsnei (Ţăsna Gorges), Foernoaga Tâmnei, and in Mehedinţi Mountains the stately Stan’s Peak.

We crossed this spectacular ridge part, within 30 minutes. Already tired and less focused, we lost the marking signs, being forced to go down on an exposed wall to meet again our route. 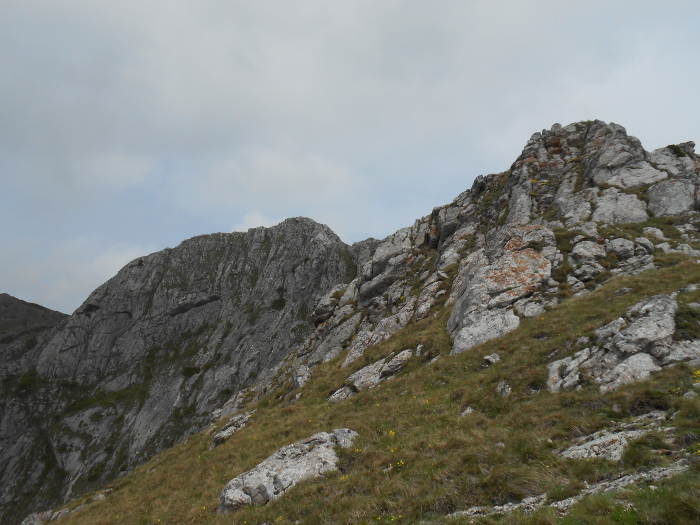 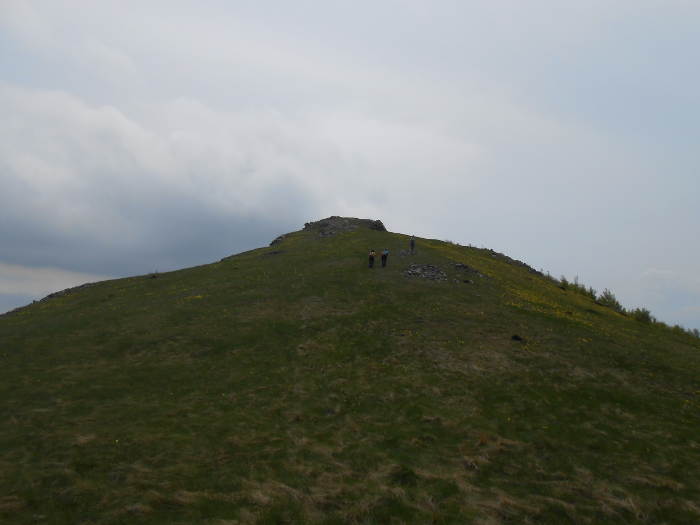 We have got on Biliana Peak at 14: 15, and of course the cuckoo was still singing as it all the day-long have done.
Until that moment we have not met any tourist but surpassingly, we arrived on Biliana in the same time with some friends of our town coming from a total different route.

The funny thing was that after some time in which we have not seen each other, we met right here.
After a short stop for resting, eating and hydration, we began the long way back. 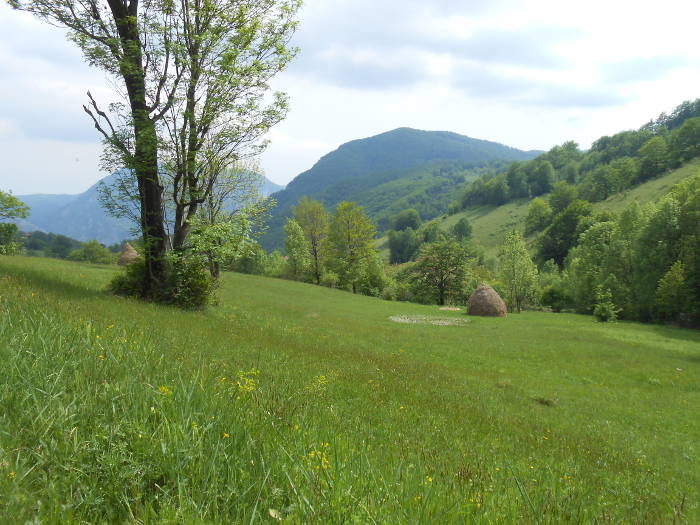 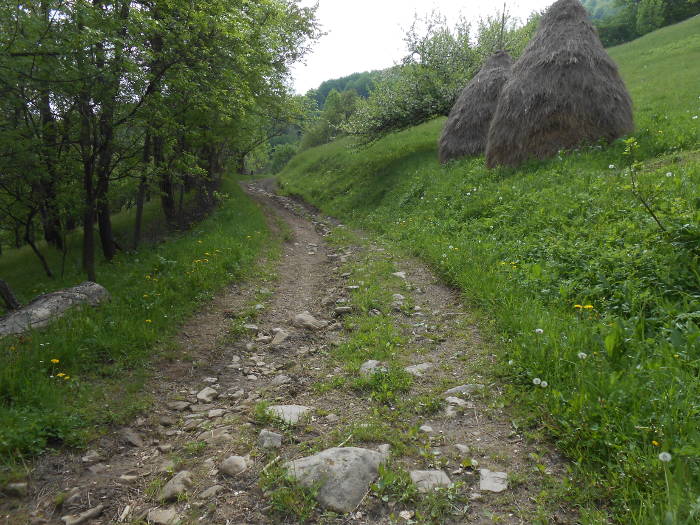 The way back to Dobraia

So, from Biliana we followed the red strip sign to a country road that we saw in the valley.
When we met the road we went to the left on red point marking until we have got to Dobraia Church and further to Dumbrava Houseguest, our starting point early in the morning.

From the meeting of the country road we needed 80 minutes to coming to Dumbrava.
Important: the way back has many variants similar marked that meet each other. Choosing always the way to the right (as you go to the valley), you will arrive to Dumbrava.

The route: Stan’s Peak with access from Izvorul lui Vârzob (Vârzob’s Spring) located on the road Herculane – Baia de Aramă.
We travelled by car from Herculane to the spring.

After we made water provisions for the entire trip from the spring, we walked back approximately 300 m on the road toward Herculane.
The route entry is marked by blue triangle, red strip, red point and red square (natural reservation limit).

As landmark you can have in view an indicating panel presenting the Natural Park Domogled – Cerna Valley, situated on the opposite side of the road.

We began the ascension at 9:00.
After we crossed a trees border we go out in a large opened area appeared after a land clearing having in the middle a water cut track.

Our way goes up very steep to the rocky area, on the forests’limit.

We came to the opened area in a zone with limestone lapies and followed the blue triangle to the right having all the time the Stan’s Peak in front of us. After one hour and 45 minutes of hard uphill, we arrived on the top. 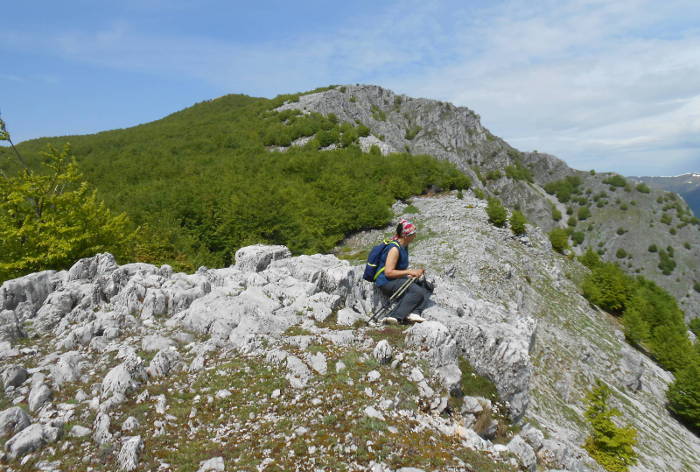 Belvedere point on our way to Stan’s Peak 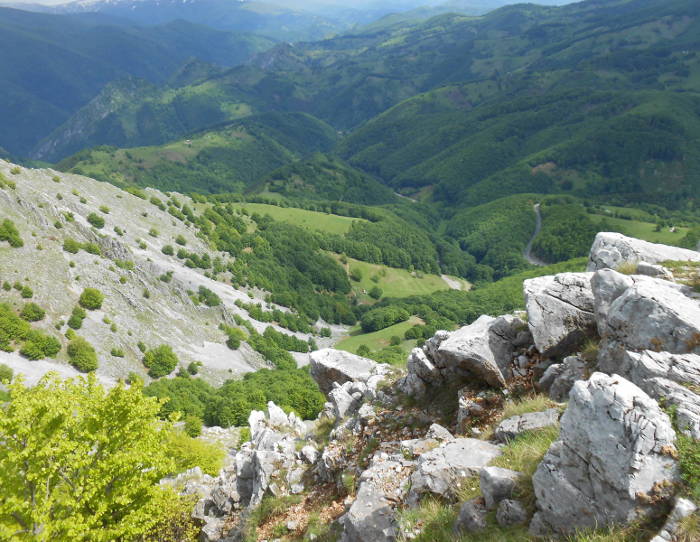 Amazing view on the way to Stan’s Peak

Since we went out of the forest the view was astonishing. We could see the road from Herculane winding down at our feet among forests.
Looking from the left to the right, in the background we admired Cerna, Godeanu, Retezat and Oslea Mountains and in the valley, solitary villages.

Turning round with 180º we could see in the background the silver strip of Danube.
It did no matter that even the weather was sunny, a solitary cloud was shaking off on us. From that moment it could rain, it was worth it.
The travel downhill took us 1 hour and 30 minutes.

„We did it again” and we felt great.
The second day route took us 4 hours in total.