Mountain lovers come in Piatra Craiului for its charm and unique challenges.
After a 3 years pause we made many times plans for an escape on a
very spectacular route; Umerii Pietrii Craiului (The Shoulders of Piatra Craiului).

This route is not marked, has orientation issues and many exposed areas, asking a good training for hard effort. It is better to go on this route in good weather conditions because a bad time would increase the difficulty of the route.
Starting point: Plaiul Foii, 7,30 in a Jully morning in 2017.

The planned route: Plaiul Foii – Refugiul (Shelter) Spirlea – Intrarea in Traseul Umerilor (the Entry in Shoulders Route)- urcare prin Umerii Pietrii Craiului (ascension through The Shoulders of Piatra Craiului)- Creasta Sudică (Southern Ridge) – Vârful La Om (La Om Peak).
We started our journey in a small group of 3 persons and unfortunately our initial plan failed. After we identified the route entry, we did not find the little stone pyramids that should indicate the route to the ridge. 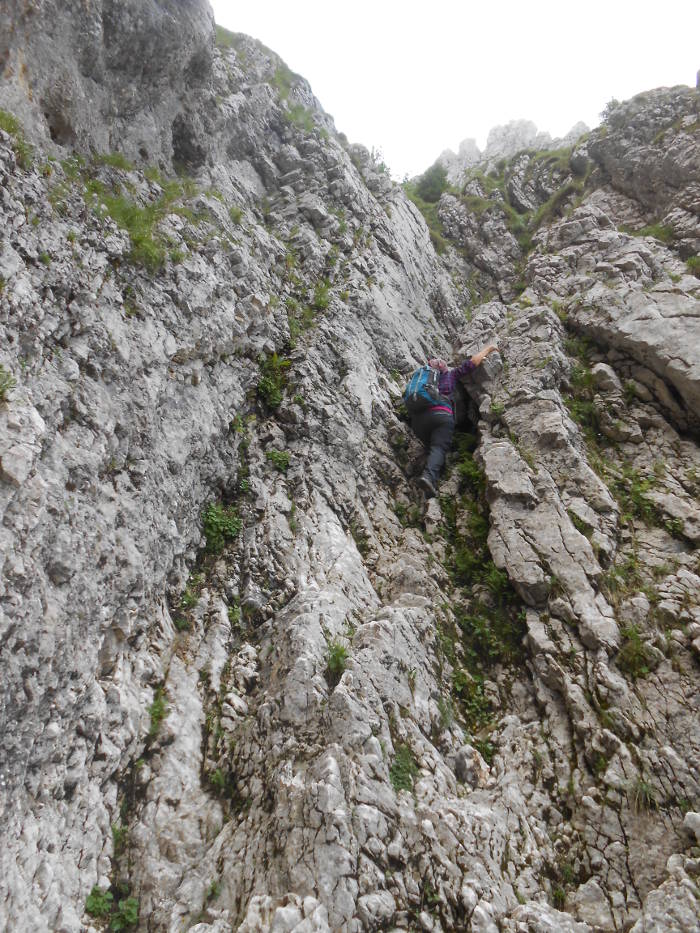 We needed to use the ensuring rope at one of the steps. Even if here there is a cable, because of the moisture, it can not be used.
In 45 minutes from the entry in Padina Lăncii we have arrived in Brâul de Mijloc, at the last step before Poiana Închisă.
Here we saw for the first time many chamois. Later, during our travel we met them many times. We also saw a lot of edelweiss, many times we had to be very care to not step on them.

We stopped for a while to rest and again have changed our plans.
We decided to go along with the other group on Brâul de Mijloc up to the Deubelweg route ( La lanţuri). As a person from the other group had been on this route before,we took this opportunity because we knew that on this trail there are also areas with orientation issues. 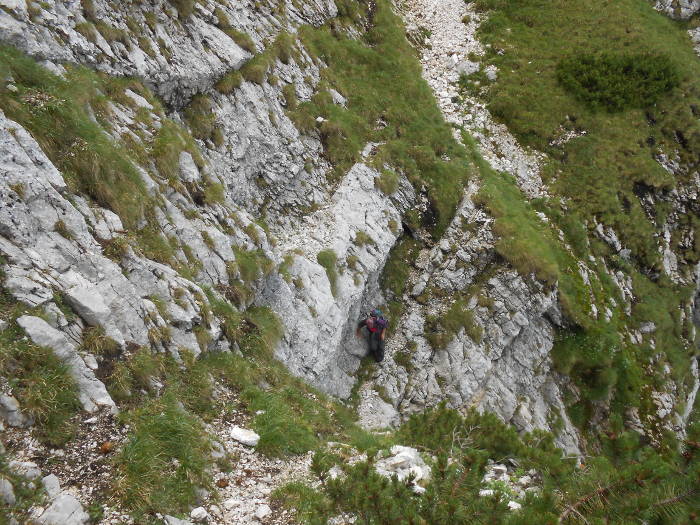 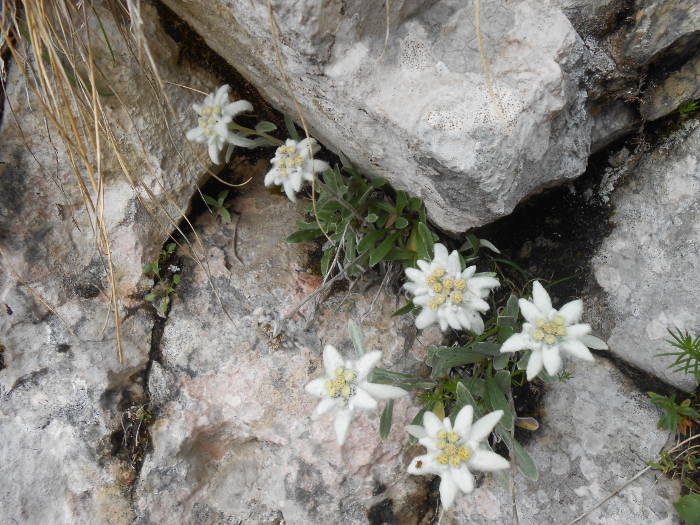 So, here we are on the narrow path, soon becoming a belt.
Shortly after we entered this path, we arrived in the first and, in my opinion, the only very exposed point of this route, passing into the Secondary Valley of the Padina Lăncii on a short crossing on grass, over a very steep area. 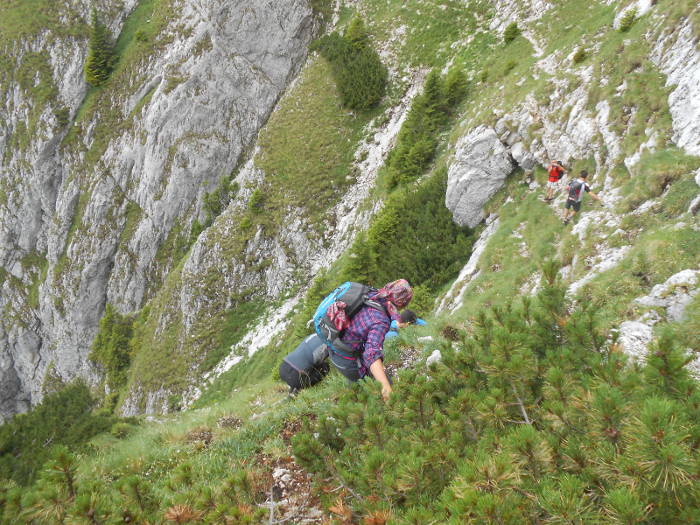 From this point Brâul de Mijloc is a succession of ups and downs, some steeper, some more gentle, several crossing points with spectacular belvedere points linking one valley to another.

What is special here comparing to Piatra Craiului ridge in the same area is the fact that the effort is greater because it is necessary to cross all the lateral ridges that descend from the main ridge in the area between Padina Lăncii and the Deubelweg.

Although these climbs and descents seem impossible to go when someone looks them, they are accessible with care, and proper physical training and of course in good weather conditions. 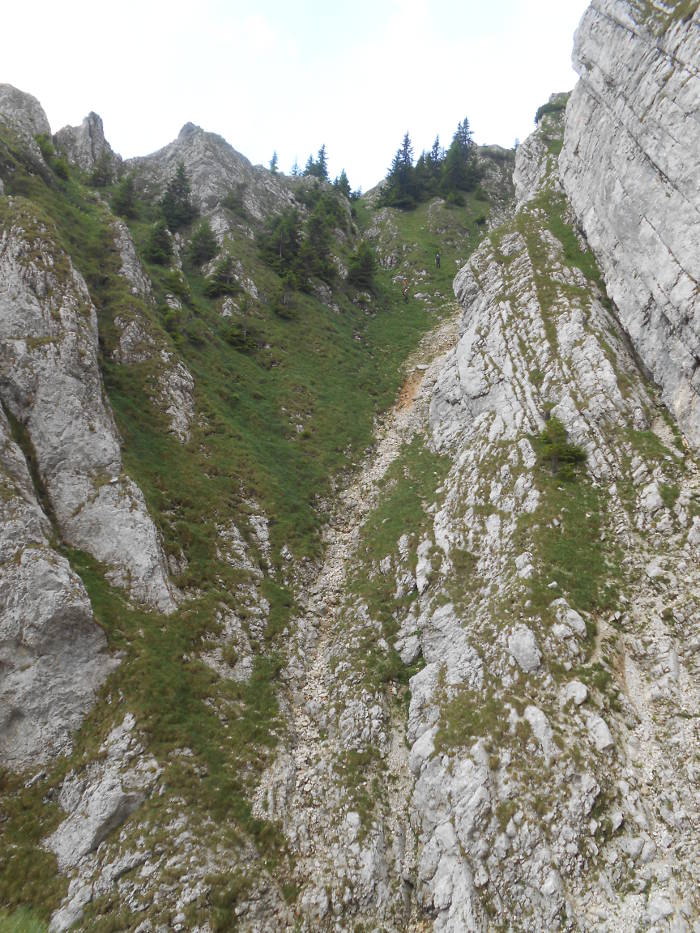 The stone pyramids called “momâi” gave us a good orientation and the view is astonishing. . 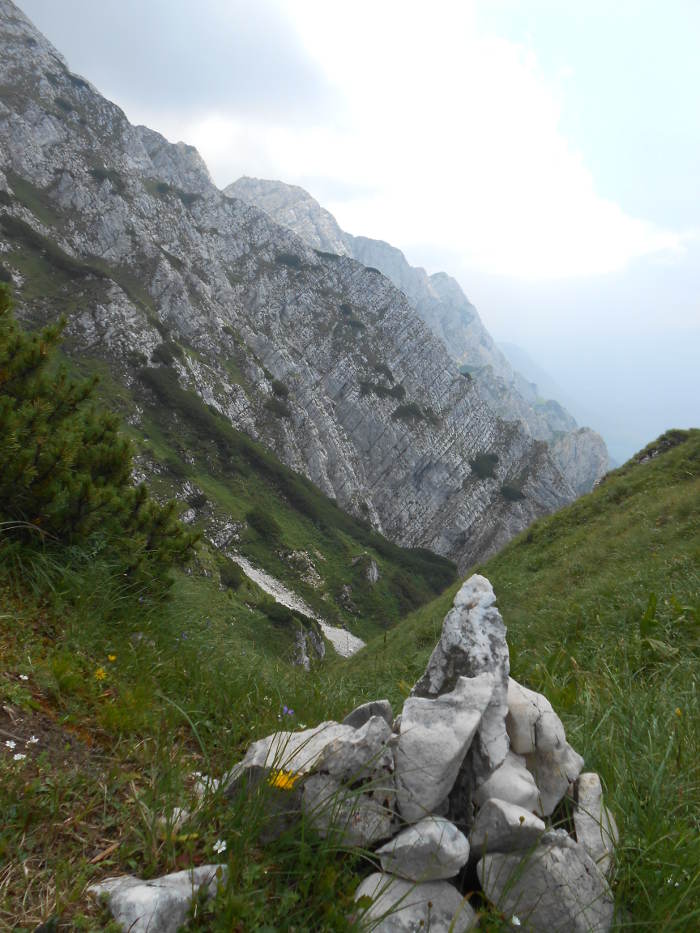 At our feet we have the dazzling steepness and areas of vegetation, juniper, scree, limestone ridges, while behind us we see Poiana Închisă.

In the distance we see Iezer – Păpuşa, the valley roads and endless forests. Even if the weather was not perfect, the visibility was very good. We tried to ignore some black clouds that were spinning through the area and the thunder that accompanied them. 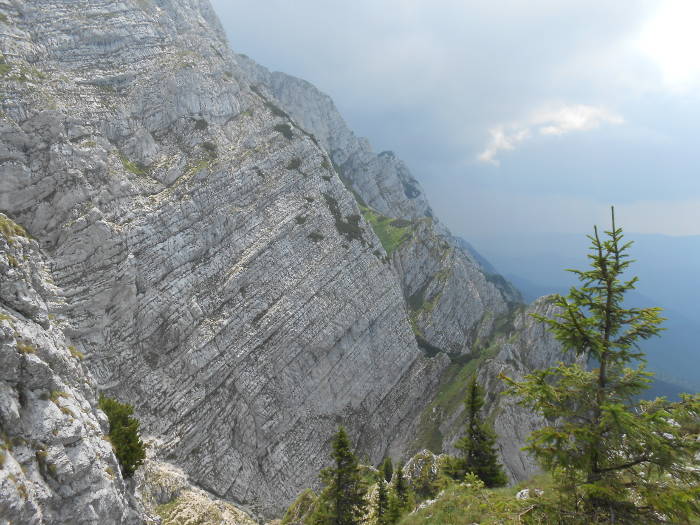 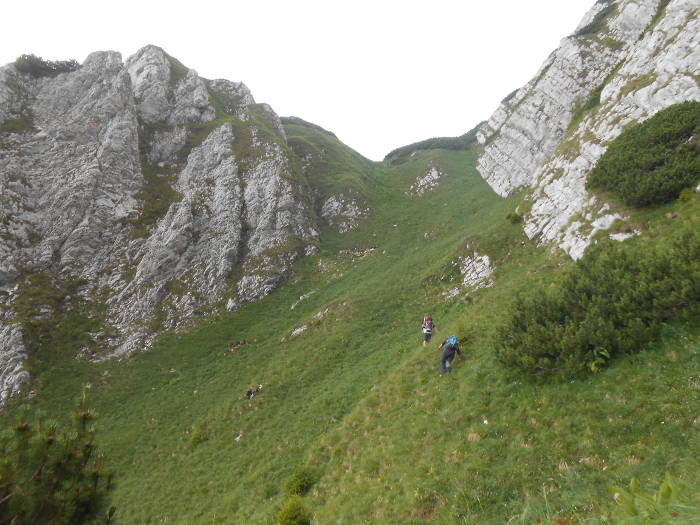 Getting down to the Chains route looks from far top-threatening and even if it’s not, it’s definitely very demanding. Our road met the Chain route above the longest route’s cable. As far as we know, there are other possibilities of getting out of Brâul de Mijloc in Lanţuri, at a higher point than the one we have reached. For us, getting here, was very appropriate.
We continued our journey along the Chain route to Spirlea Shelter where we arrived at 17.45. 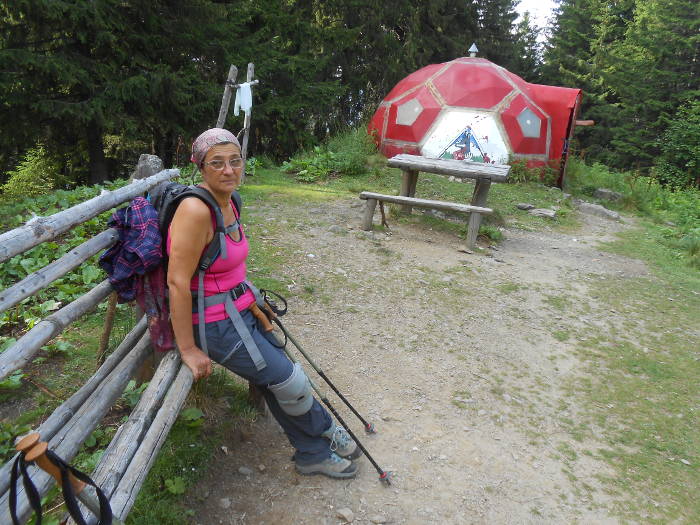 So, with a plan made at home and one on-site, things went out as best it could be, because the route that we made was a particularly spectacular and challenging, and less travelled.

The trail starts at an altitude of 849 m at Plaiul Foii and reaches 1920 m in the area where Brâul de Mijloc intersects the shoulder trail. This altitude difference does not say everything about the effort required to run this route because the road climbs and descends significant levels differences.

There is no water on the route. The water supply is made at the spring on the road to Spirlea and the supplies can be filled in Poiana Închisă if you get there and if you can find the spring.

For us, the duration of the route was 11 hours including the time we was looking for the way to Umeri.
An ensuring rope is required, especially in bad weather.