Did it happen to you to want something very much in your youth and to fulfill your desire after many years?
That’s what happened to us with Vânturariţa – Buila.

It was about (so much passed?) …. in 1979, I think, in the first summer vacation as students, when we (me and my husband) made a long trip that included Căpăţânii Mountains, too. One of the biggest surprises was the spectacular views from Căpăţânii over the Vânturariţa – Buila Mountains. Since then we have always wanted to go there but, the time passed year after year and their turn came just in 2014.

It was scheduled for 1 May, but the weather was very bad and again was put on the waiting list for another time.
So, on 23, 24, 25 May, after a serious study of the weather forecasts, we did it. Because on the same list of specialties was written also Stan’s Valley – Făgăraş Mountains, we included it in the program of this travel, too.
I was a team of 4 persons.

We stayed in Cheia, Vâlcea County, to a family who lives near the village church (very beautiful).
Saturday morning at 7 a.m. we left by car to the Pahomie Hermitage from where we planned to entry in the route.
After some adventures on the road, we finally came to the Pahomie hermitage, walking the last part of the forest road on foot.
We refreshed ourselves to the waterfall at the hermitage and we set off on the forest road in the direction of Patrunsa Monastery.
After about 10 minutes we have got to the marking pillar that is the starting point of the path through the forest. Marking to follow was blue point. We started the steep climb which in the first 15 minutes squeezed us, after that the slope was more gentle. We had a small event, meeting a bear footstep, but we forced ourselves to ignore it and go ahead as fast as possible.

The forest is gorgeous and as the altitude grows through the trees the view of the valley opened under our eyes, so that, after about an hour and 40 minutes when we reached the Ştevioara sheepfold, we had a dream image in front of us. All around us was a glade full of a multitude of flowers, bordered by a circle of high ridges. In the distance forests lay as far as eye could see, in the valley small villages, up to Olt. Far in the background we saw Cozia and Făgăraş Mountains covered by snow. 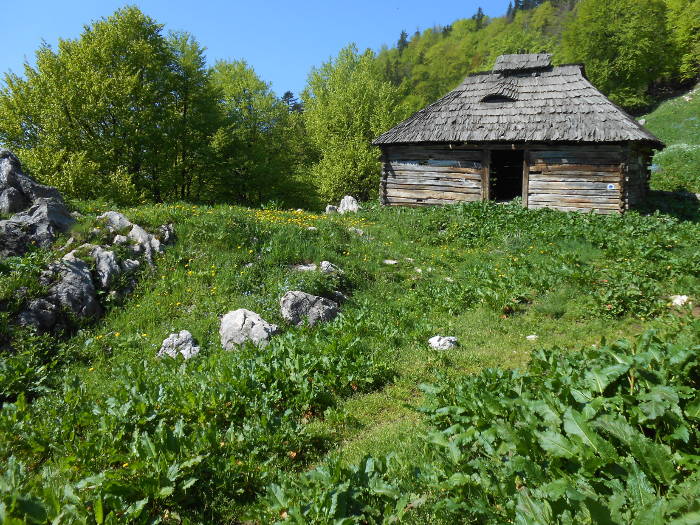 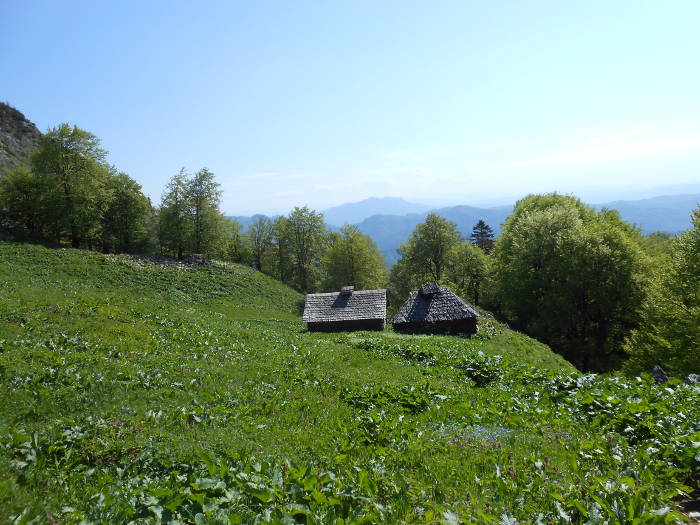 After a short rest we continued our journey and got to the alpine area on Frumoasa ridge and then further to the Stevioara saddle. Until this point the travel took us 3 hours and 20 minutes. As soon as we got out of the woods, the landscape changed to become more rugged, but the floral range was even more varied, and snow appeared in larger or smaller spots, depending on sun exposure. 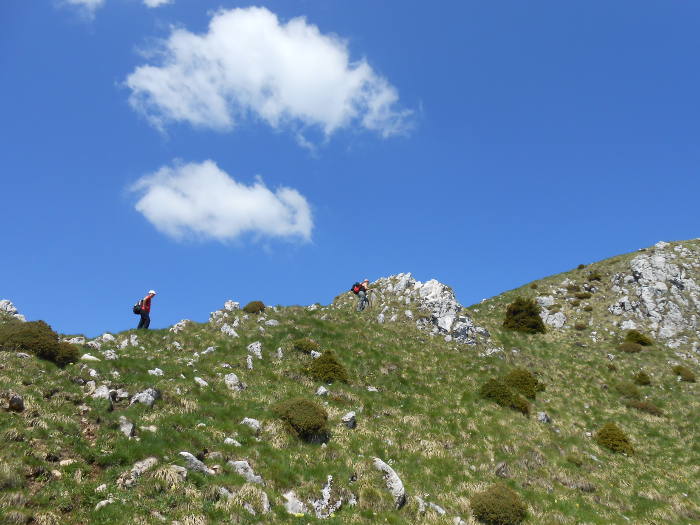 From Saua Ştevioara (Ştevioara Saddle) the view is spectacular both on the ridge of this massif (Vânturariţa and Ştevioara Peak) as well as on Căpăţânii and Parâng Mountains and on the valleys from which we came. Until this point, the marking was pretty good and we need to stop only 2 times to look for it. 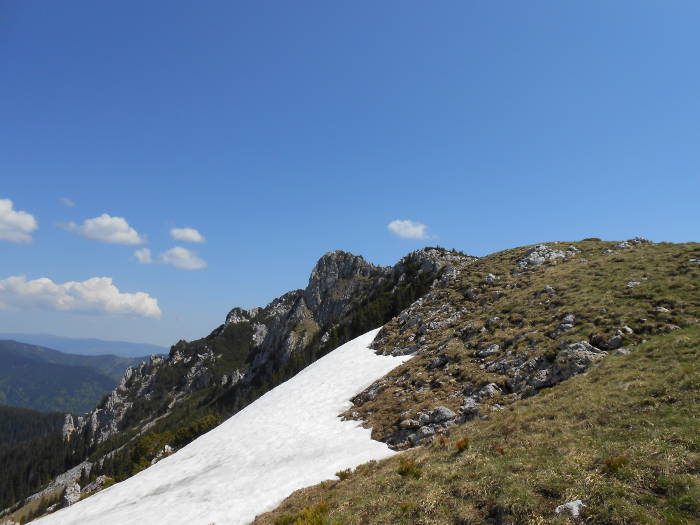 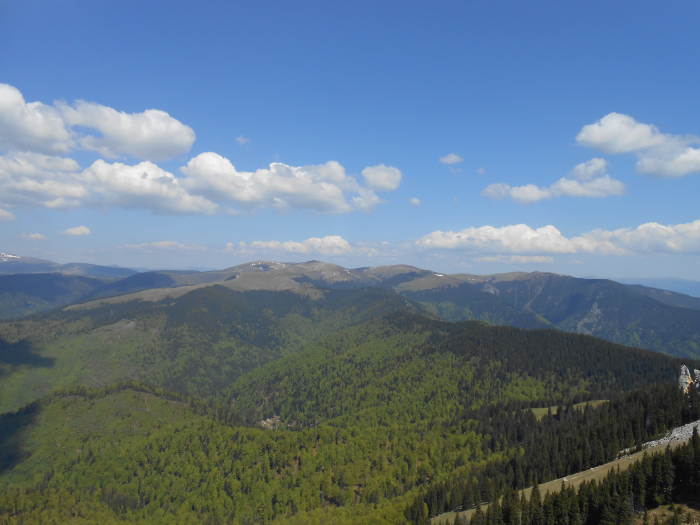 We rested and admired the scenery around and we have hardly decided to leave this wonderful point of belvedere. After 10 minutes we continued our travel on the ridge to Şaua Builei (Builei Saddle). We were very happy because after such a wait, we finally had this journey and in wonderful weather conditions. We have admired from the altitude Poiana de Piatră (the Stone Glade) and Buila and Albu peaks. Crossing the lapies fields, we arrived after an hour and 20 minutes at the shelter of Şaua Builei. 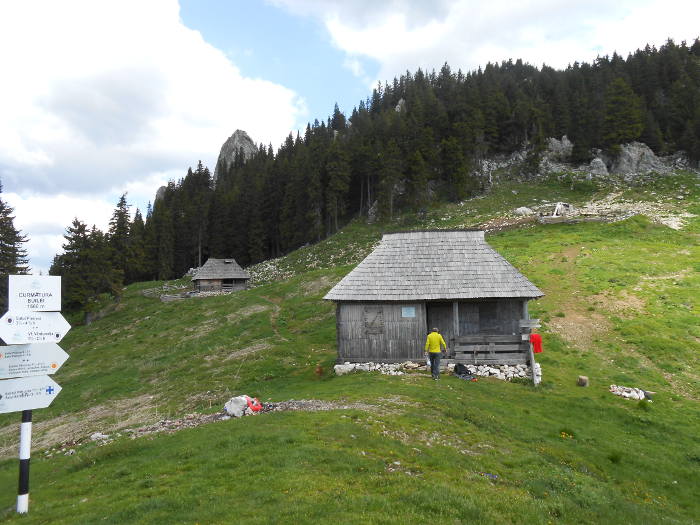 The shelter is in good condition and very clean. We spent 10-15 minutes here to eat, drink water and listen to the birds’ song and decide on which of the two possible variants we will go to Pătrunsa. Of course the boys chose the shortest version that, normally, was also the steepest. But it was worth it, because the route is so beautiful and spectacular because of the multitude of flowers and the permanent perspective on to the monastery that we forgot our legs were hurt. 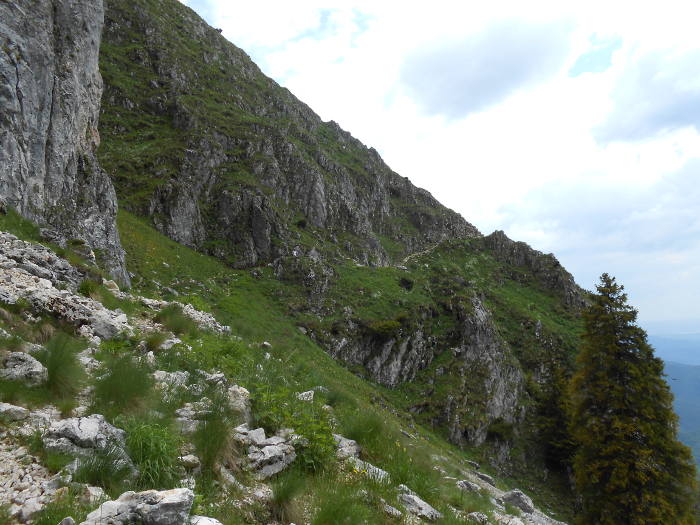 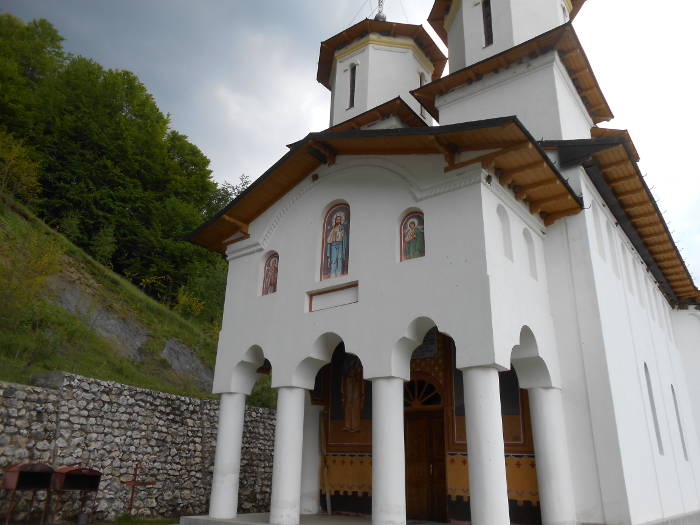 We made a brief visit to the monastery and then went back to Pahomie. After about 20 minutes in the woods we went out into the forest road and then in about an hour, we got to the hermitage, where we stopped for a short visit. On the way, I found a unique thing that I have never met before. Even in the forest road, on a leaf, a drop of water had formed a coating like a perfect tear around some a sand granules. It seemed like a small universe closed in that perfect tear of water. Of course I took a super picture. 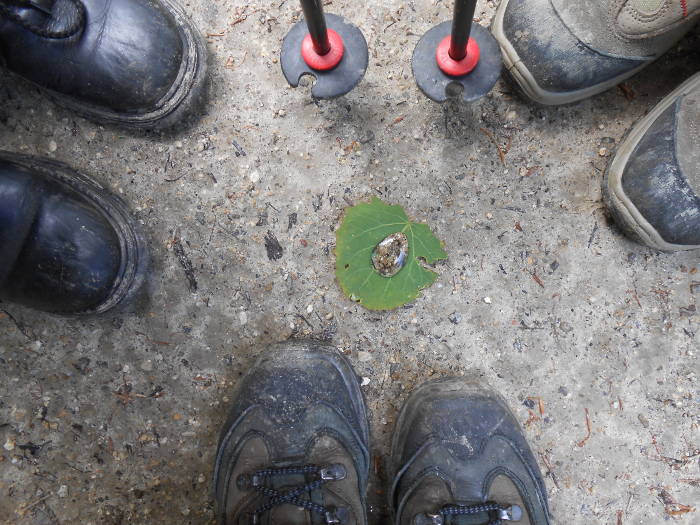 Water drop on a leaf

From the hermitage, we walked to the place where we have let the car in the morning.

The second day we woke up in the morning (7 o’clock) and we left to Curtea de Argeş for the second route. The weather was still good, but as we approached the target, it became darker and finally it started to rain. When we got out of Curtea de Argeş, it was still raining and we became more and more silent. We decided to go up to Vidraru and then if the weather would be still bad, to go back and visit the Poienari Fortress (I love the fortress but it would have been just a consolation award, comparing with our plans).

We have arrived at the site (on Transfăgărăşan before the tunnel preceding the Vidraru dam, where there is a hairpin turn and a triptych). We parked, took our equipment and started to go in a very bad mood, because immediately started to rain quite seriously. 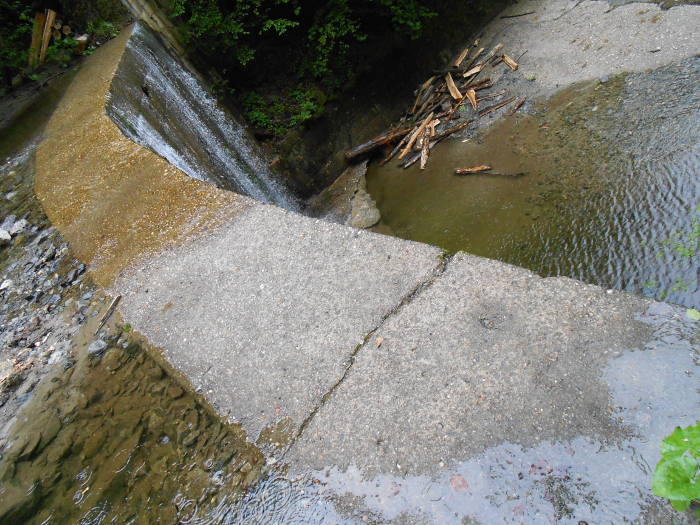 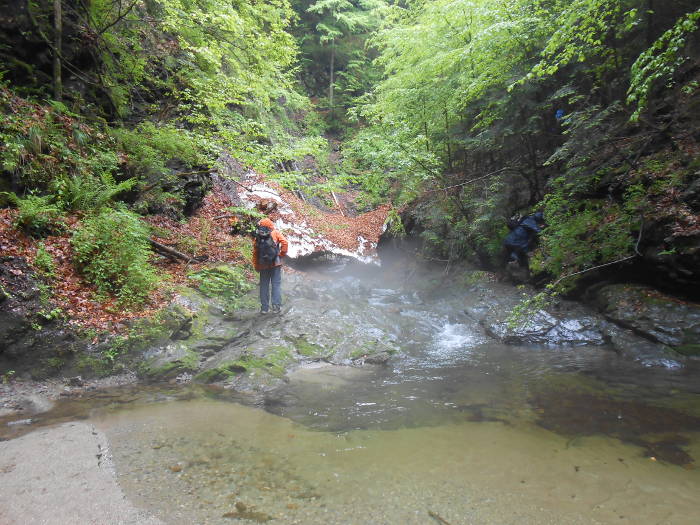 Our way in Stan’s Valley

We passed the concrete dam, and as no sign could be seen, we started to look for it and to quarrel with each other. Some of us wanted to go back because the weather was not appropriate to go on such a route. The others (more daring), wanted to go ahead, as we already have got here. We were lucky with a forester that we met. He claimed that there is no danger (but it was), and so, we started off again.
If I say the route is spectacular, I did not tell you anything. It’s something of a dream. More precisely, it goes through a canyon (the gorges of Valea lui Stan River) on a route mostly equipped with cables and iron stairs but the path is suspended most of the time many meters above the water.

The route is safe with the current arrangements, but even so, in many places attention, concentration and some courage are necessary. But all the efforts are rewarded by the splendid landscape and the effort really does not matter anymore. It’s hard to find words describing such a route, but surely the uniqueness is an indisputable attribute. As we went through the route, our perseverance was rewarded; the rain stopped, the sun rose and our sensation that we made the right choice, filled us with satisfaction.

Some additions are necessary: appropriate equipment (the passages may be slippery), a team, even a small one (the area is wild and it is not advisable to go by yourself). Exit from the canyon to the forest road is made by some very beautiful meadows and, if the sky is cloudless, the image of Lake Vidraru with Negoiu Peak in the background is breathtaking. 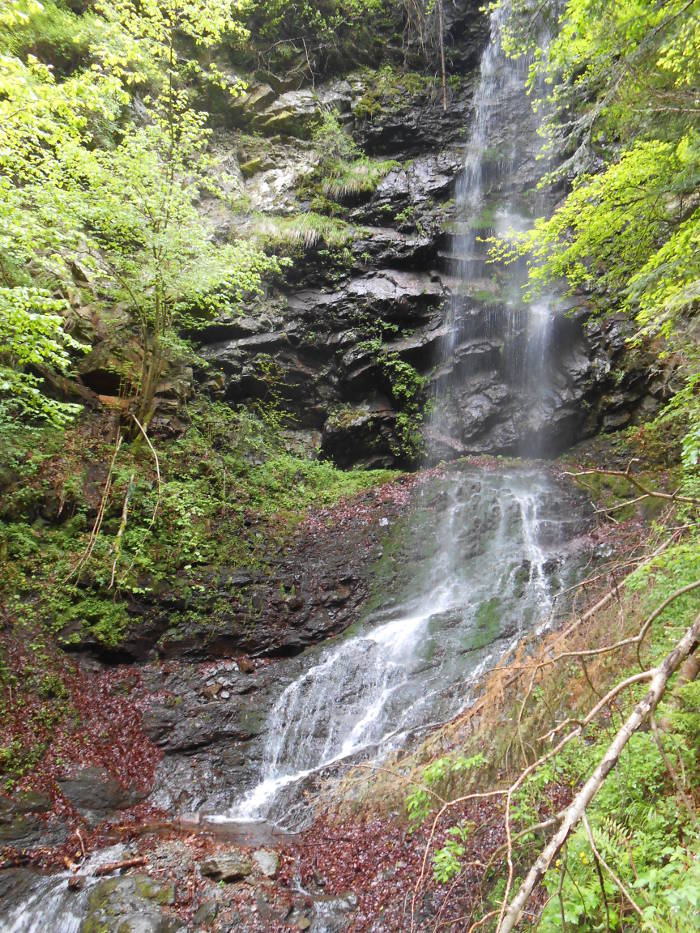 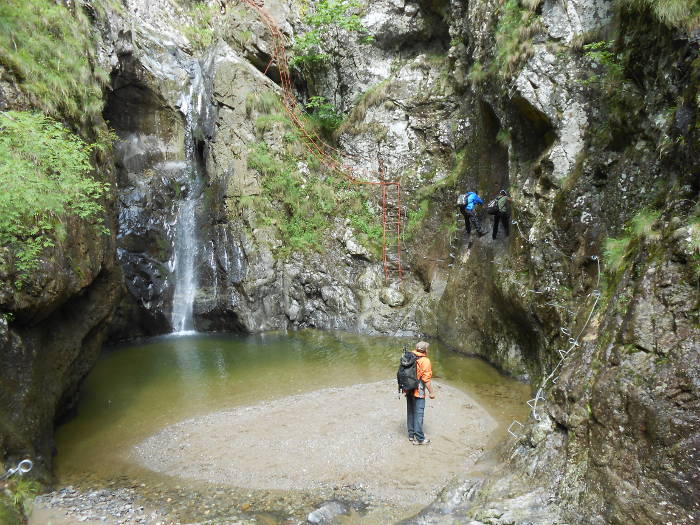 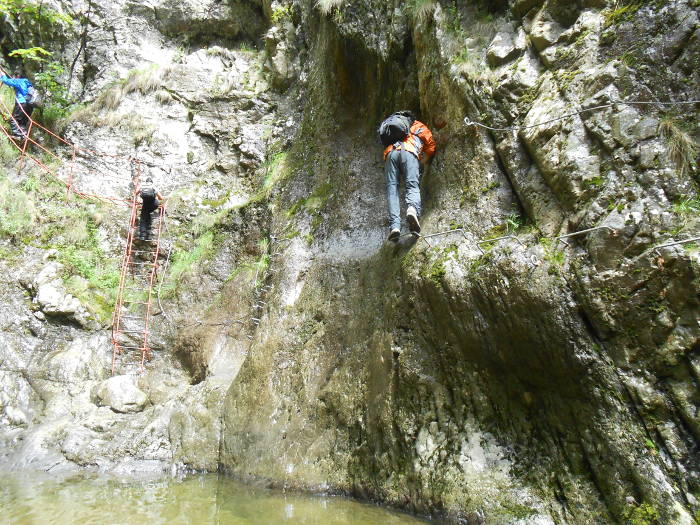